The past year bray.ie has been very busy increasing their digital output. The community engagement strategy is a team effort with the Bray Municipal District Mangement team and us here at pc | productions. Reaching out to 2.2m users is a testament to the team’s hard work and dedication. 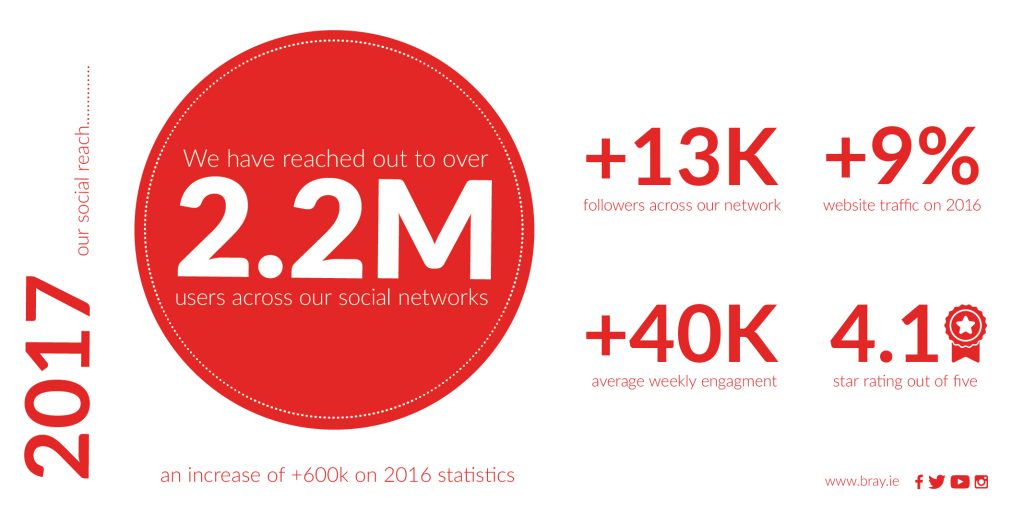 A big thanks to the many volunteers, businesses, community groups and local media who helped make our tourism initiatives a great success in 2017.

Thanks for helping share our content in 2017. We hope you continue to engage with us @bray_ie throughout 2018 & beyond.

Bray.ie was launched back in 2011. It was part of the Bray Town’s Economy Think Tank outputs. BETT (Bray Economic Think Tank) was an economic forum established in 2009 its aim was to create a sense of local pride, community spirit and to promote Bray as an ideal place to live, work and do business.


We use cookies on our website to give you the most relevant experience by remembering your preferences and repeat visits. By clicking “Accept”, you consent to the use of ALL the cookies.

Any cookies that may not be particularly necessary for the website to function and is used specifically to collect user personal data via analytics, ads, other embedded contents are termed as non-necessary cookies. It is mandatory to procure user consent prior to running these cookies on your website.

Performance cookies are used to understand and analyze the key performance indexes of the website which helps in delivering a better user experience for the visitors.

Analytical cookies are used to understand how visitors interact with the website. These cookies help provide information on metrics the number of visitors, bounce rate, traffic source, etc.

Advertisement cookies are used to provide visitors with relevant ads and marketing campaigns. These cookies track visitors across websites and collect information to provide customized ads.

Other uncategorized cookies are those that are being analyzed and have not been classified into a category as yet.

SAVE & ACCEPT
Powered by