We said hello in March 2010 and along the way we have created compelling videos and digital content which has reached over 8 million users. We have built strong relationships across different sectors from large multi-nationals to SME’s producing over 600 projects.

Some of our successes so far include winning ‘Outstanding Small Business’ Award by the Bray & District Chamber of Commerce and we also helped Bray.ie win the ‘Best Connected Community’ Award in the Community and Council Awards 2017. The awards recognise and celebrate community and councils working together.

We continue to invest in our brand – launching a new identity and website in 2017, now offer 4K & drone video production services throughout Ireland.

These last nine years have been truly brilliant but wouldn’t be possible without our small but very talented team. We would also like to take this opportunity to thank all of our clients. We really appreciate your business, support and help given to us. We wouldn’t be who we are today without my family, friends, colleagues and mentors support. They have encouraged and helped me tremendously.

It’s great to be able to have a job/business that I love.

Here are some more highlights: 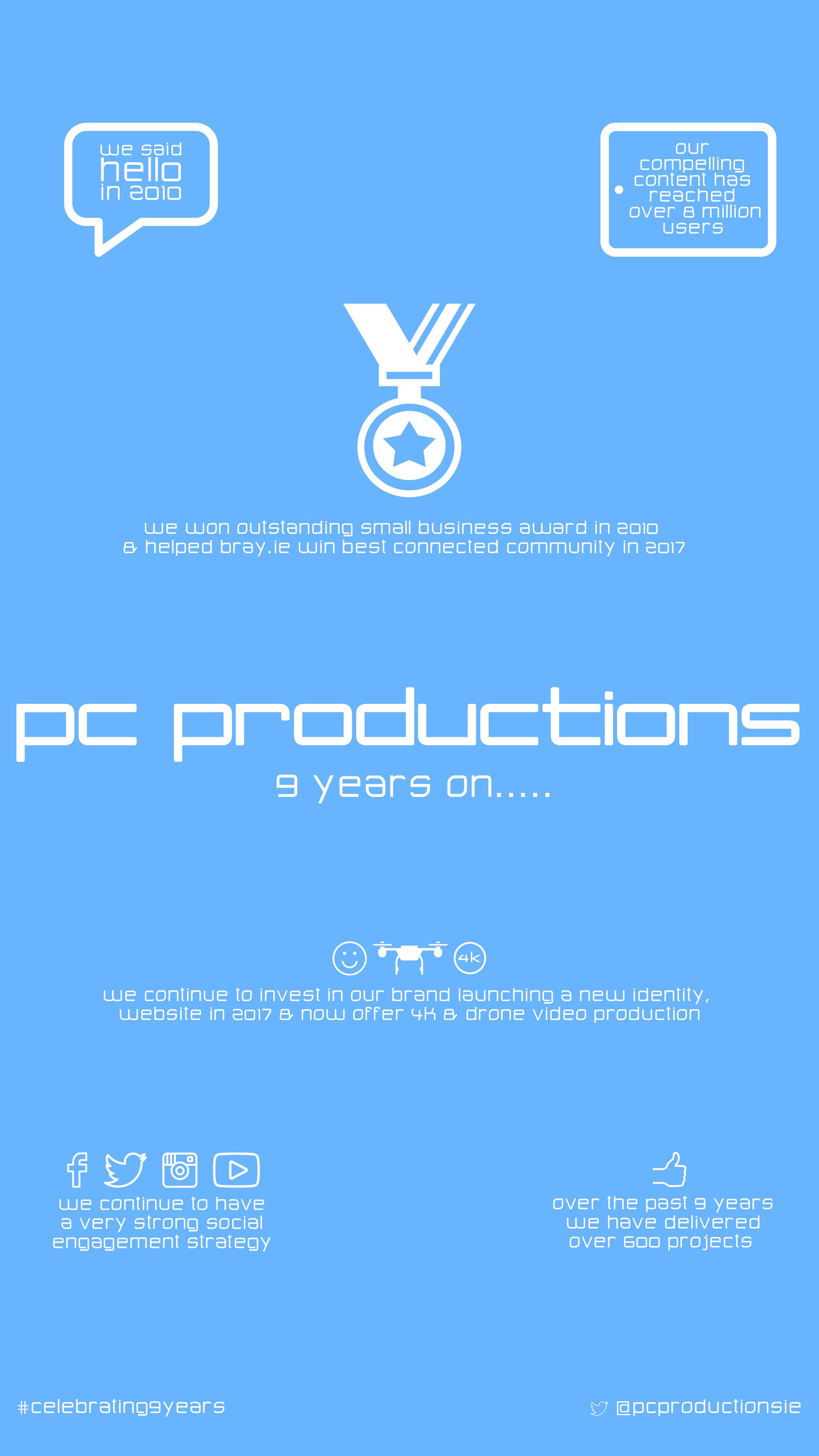 Great to see the #WestportAirshow feature on the @rtenews at 9 O’Clock pic.twitter.com/1Jvo4tsNxA

Did you know that we helped @bray_ie win the ‘Best Connected Community’ Award in the Community and Council Awards https://t.co/LcB78kxWCd pic.twitter.com/DZQGUGlQ4O

#ThrowbackThursday…… Some motion graphic work we completed back in 2014 for #Tesco pic.twitter.com/3MbQbgNkM9

Some video stills from a project we produced for @Ryanair https://t.co/Z4JDH0Du1C pic.twitter.com/eKbCiZT4kS

#ThrowbackThursday filming with Louis Walsh back in 2014 pic.twitter.com/9HbUB9MfLJ

We produced some great content over the years. Take a look: #2016Review #ThisHappened pic.twitter.com/42jUK3NvcP

Over the past 7 years we have interviewed and worked with a few well-known personalities & politicians…. pic.twitter.com/yijHFgv4K2
— pcproductions (@pcproductionsie) September 19, 2017

One of our projects we produced for @Ryanair pic.twitter.com/CAIufBTJb9


We use cookies on our website to give you the most relevant experience by remembering your preferences and repeat visits. By clicking “Accept”, you consent to the use of ALL the cookies.

Any cookies that may not be particularly necessary for the website to function and is used specifically to collect user personal data via analytics, ads, other embedded contents are termed as non-necessary cookies. It is mandatory to procure user consent prior to running these cookies on your website.

Performance cookies are used to understand and analyze the key performance indexes of the website which helps in delivering a better user experience for the visitors.

Analytical cookies are used to understand how visitors interact with the website. These cookies help provide information on metrics the number of visitors, bounce rate, traffic source, etc.

Advertisement cookies are used to provide visitors with relevant ads and marketing campaigns. These cookies track visitors across websites and collect information to provide customized ads.

Other uncategorized cookies are those that are being analyzed and have not been classified into a category as yet.

SAVE & ACCEPT
Powered by